From 16 to 18 November 2021, ENGINEme GmbH will present the latest generation of ARENS RVI marine engines under the “ARENS MOTORS” brand. Among other things, the Berlin tech company has equipped their drive units with larger engine displacement.

With 379 ccm, the small power plants achieve a power-speed ratio that can compete with diesel inboards of equal performance. Nevertheless, RVI drives weigh only half as much, are much more compact and are easier to install. Since four-stroke-typical parts such as cylinder head valves, camshaft, oil circulation lubrication or oil sump are omitted, operation is not only very low-maintenance, but also insensitive to strong position changes, e.g. due to swell or heeling. The engines are also equipped with a closed fuel system that doesn’t allow fuel or vapours to escape. A special feature of RVI technology is its flexibility with regard to green fuels and sustainable long-term use.

ARENS RVI SAIL 15 – “New inboard: as easy to install as an outboard”

The displacement-enhanced ARENS RVI SAIL 15 will be on show at METSTRADE. The first generation of the Saildrive drive was first presented in 2018 by YACHT magazine as an “New inboard: as easy to install as an outboard” 1. In 2019, ENGINEme GmbH presented a showcase in which the ARENS RVI SAIL 15 was installed in a customer yacht of the type HAI 760. After test and demonstration runs, MotorBoot magazine described the drive as a “boxer power dwarf”2. The magazine’s field report highlights the “silky throttle response and linear thrust as comparable to a powerful outboard”. ARENS RVI SAIL 15 won the equipment award at the WIND & WATER Trade Fair in Warsaw in 2020.

ARENS RVI SHAFT 15 – world premiere of the smallest shaft drive on the market
Following the Saildrive variant, ARENS RVI SHAFT 15 now makes its world premiere in Amsterdam. Like the ARENS RVI SAIL 15, it is based on the powerhead designated as RVI 379-2Z. Since the two-cylinder boxer does not require an oil sump, it can be installed and operated in any position, i.e. with a horizontal or vertical crankshaft. With a dry weight of only 46 kg, the ARENS RVI SHAFT weighs even less than its lightweight Saildrive brother with 52 kg, as there is no foundation box with sleeve seal and underwater part. With an overall length of 550 mm incl. reversing gear and an overall height of 405 mm, it is also short and flat. These features give the ARENS RVI SHAFT inboard engines unprecedented flexibility in terms of boat sizes, operating conditions and handling.

The drive unit on which the marine engines are based is the RVI 379-2Z boxer engine from ENGINEme GmbH. These new types of aggregates are designed in such a way that they can be delivered as so-called “long block” engine, i.e. without typical marine assemblies and add-on parts such as reversing gears or generators. This allows the engine to be integrated as a range extender or generator drive for yachts. The electronic control unit also has an interface for real-time data exchange via CAN-BUS with other on-board control units. If required, the operating characteristics of the engine can be adapted to the customer’s individual operating strategy.

Here you can find ENGINEme GmbH under the brand “ARENS MOTORS” at METSTRADE in Amsterdam: 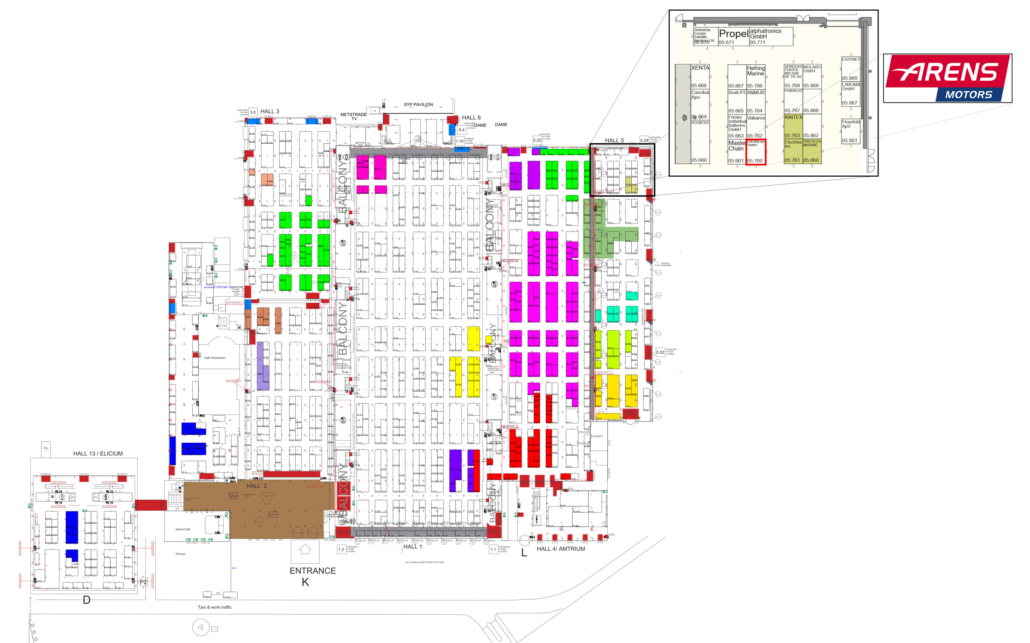 Latest updates directly in your inbox: Subscribe to our newsletter

Arens Motors develops an extremely compact direct injection motor – the first of its kind in the world – and a 2,900 psi high-pressure pump for various injector and atomising systems.

Do not miss any news!
Subscribe now!
Scroll to top
Manage Cookie Consent
We use cookies to optimize our website and our service. We do not use advertising cookies.
Manage options Manage services Manage vendors Read more about these purposes
Preferences
{title} {title} {title}